﻿ Template for manuscripts - Treatises and Documents, Journal of Ethnic Studies

THE TITLE OF THE ARTICLE IN ENGLISH (Times New Roman 14)

Abstract of the article in English (Times New Roman 12)

Note: The abstract should include a brief presentation of the issues discussed, the methodology used, the main findings and the conclusions.

PLEASE NOTE: the Title, Abstract and Keywords should not exceed 1100 characters with spaces.

Key words in the language of the article: (3-7)

PLEASE NOTE: the Title, Abstract and Keywords should not exceed 1100 characters with spaces.

Structure of the text: The text of the article should be structured as follows: short introduction, presentation of methodology and main theses, discussion (as the main part of the article) and conclusion(s).

Paragraphs: Paragraphs should be separated by one line and should not be indented. Example:

Three issues of the journal are published every year, usually in April, September and December.

Articles that are submitted must be original, unpublished material an should not be simultaneously under consideration – either in whole or in part – for publication elsewhere.

Quotations: Substantial quotations of forty or more words should form an indented paragraph, single spaced, without quotation marks and in smaller font size (font size 11). The omission of matter within a quoted text should be indicated by /…/, changes of cited
text with [].

Example 2: substantial quotation (more than 40 words, paragraph):
Sociocultural and geographical variations within a language are signaling matters that are of great importance to those who use them. Varieties serve valuable group identity functions for their speakers; they express interests that are closely linked to matters of self-respect and other psychological attributes (Corson 1993, 102).

Abbreviations and technical terms: must normally be explained in the text when first mentioned. The phrase ›percent‹ should always be used in textual matter, not ›percent‹ or ›%‹. The latter should generally be used only in tables.

Tables: These must be properly titled and numbered consecutively in the order in which they appear in the text. The sources for the data in the table must be listed under the table and in the list of references at the end of the article.
Font: body of the table – Times New Roman, font size 11; the title of the table and sources – Times New Roman, font size 12, title capitalization rule. Any possible comments to the table should be kept to the minimum, marked with an asterisk (*) or superscript letters (a, b, c) and explained under the listing of sources (font size 11).

Sources: Statistical Office of the Republic of Slovenia (2009).
* Data are prepared according to new determination of the population of Slovenia, published in 2008.

Figures: Graphic materials (diagrams, graphs, maps, illustrations, etc. should be submitted in black and white, according to standard modes of computer design. They should be as clear and simple as possible and be kept to the necessary minimum. They should be titled »Figure« and should also be numbered consecutively, with Arabic numerals, in the order in which they appear. The title should be written in Times New Roman, font size 12 and complied with title capitalization rule. The source(s) for such graphic materials must be listed under the figure and in the list of references at the end of the article. Please note that author(s) should secure copyright permission for graphic material from sources other than their own.

Figure 1: Minority Members as Percent of the Total Population, EU-27, 2007 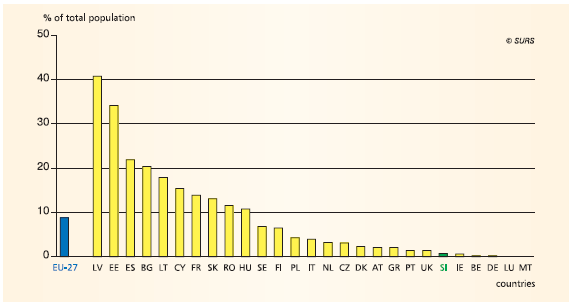 Source: Statistical Office of the Republic of Slovenia (2009).

REFERENCES (should be placed on a new page at the end of the article; Times New Roman 12)
Note: References should be listed in alphabetical order. Please take care that all and only those references cited in the text appear in the list of references. General bibliographies should not be provided.

You can find additional guidelines for references and quotations of literature in the attached tables.